Even though they do not live in jungles, lions hold the title of Kings of the Jungle. Our lion quotes selection talks to the lion’s physical appearance, confident gait, bravery, and fearful roars that single them out as royalty amongst beasts.

The lion is a well-muscled cat with a long body, large head, and short legs. We can find lions mainly in sub-Saharan Africa and the Indian state, Gujarat.

With great night vision, lions make excellent nocturnal predators. They are social animals that live together in groups called prides. The males are fierce protectors of the pride's territory while the females (lionesses) take charge of the cubs.

In the ecosystem, lions contribute in no small measure to keep herbivore populations, especially big ones like zebras, giraffes, and buffaloes, in check. Poaching, climate change, and habitat loss pose threats to these extraordinary creatures.

Related: For more information on this most majestic of animals check out our article full of interesting lion facts.

Below is our handpicked selection of inspirational lion quotes about these majestic animals.

Majesty and power of lions in the wild 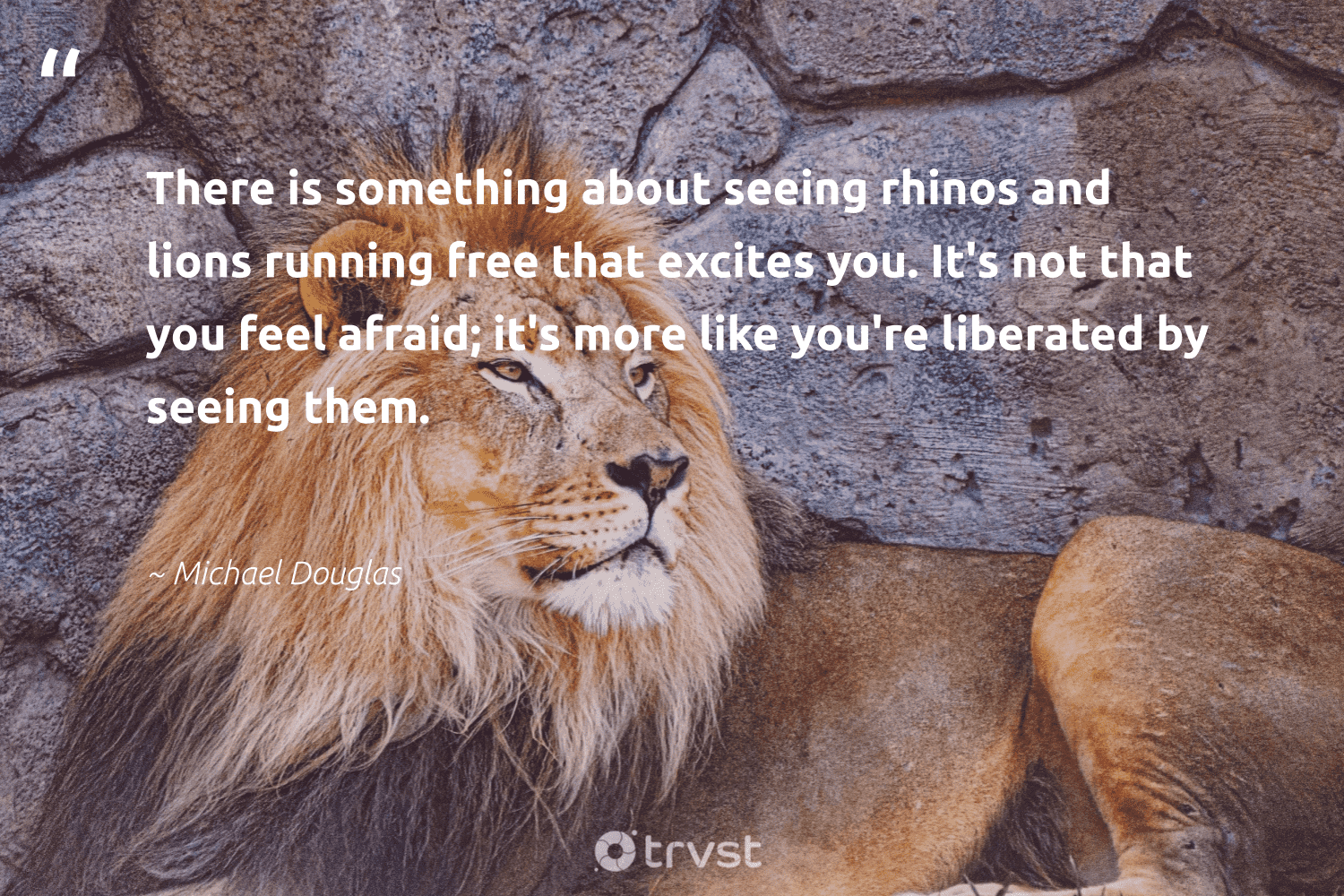 Michael Kirk Douglas is an award-winning actor and producer. He advocates for nuclear disarmament and the Nuclear Age Peace Foundation. He's a board member of the Nuclear Threat Initiative and is an honorary Board Member of the anti-war grant-making foundation Ploughshares Fund.

Grown lions weigh anything from 300 to 500 pounds. That's huge! Full-grown males are about 2.2 meters long, tail excluded. While females who are smaller in size can grow up to 1.5 meters and weigh about 180kg. 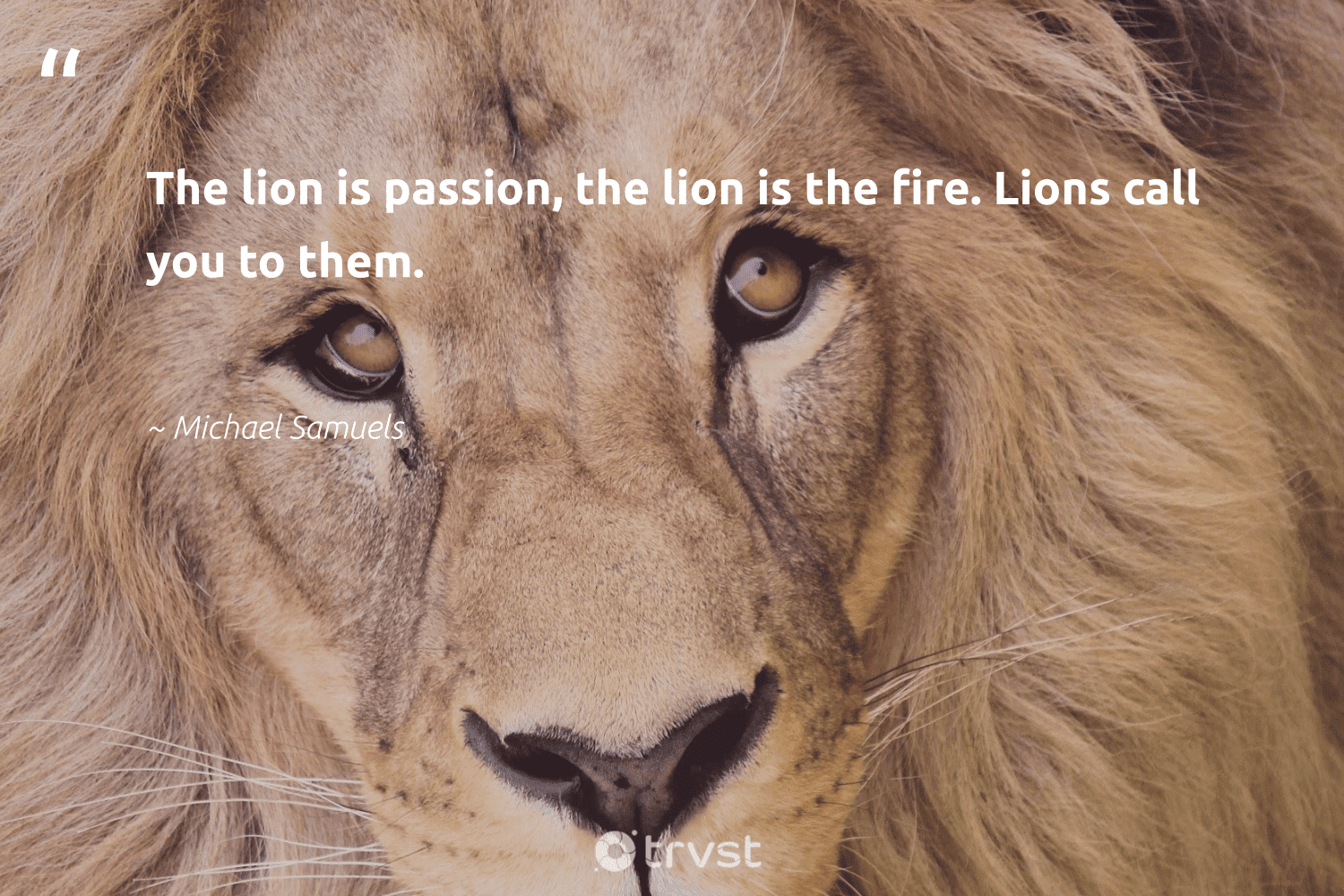 The author of this lion quote, Michael Samuels, is a British television director, producer, and writer. His award-winning works include Any Human Heart and The Curse of Steptoe. 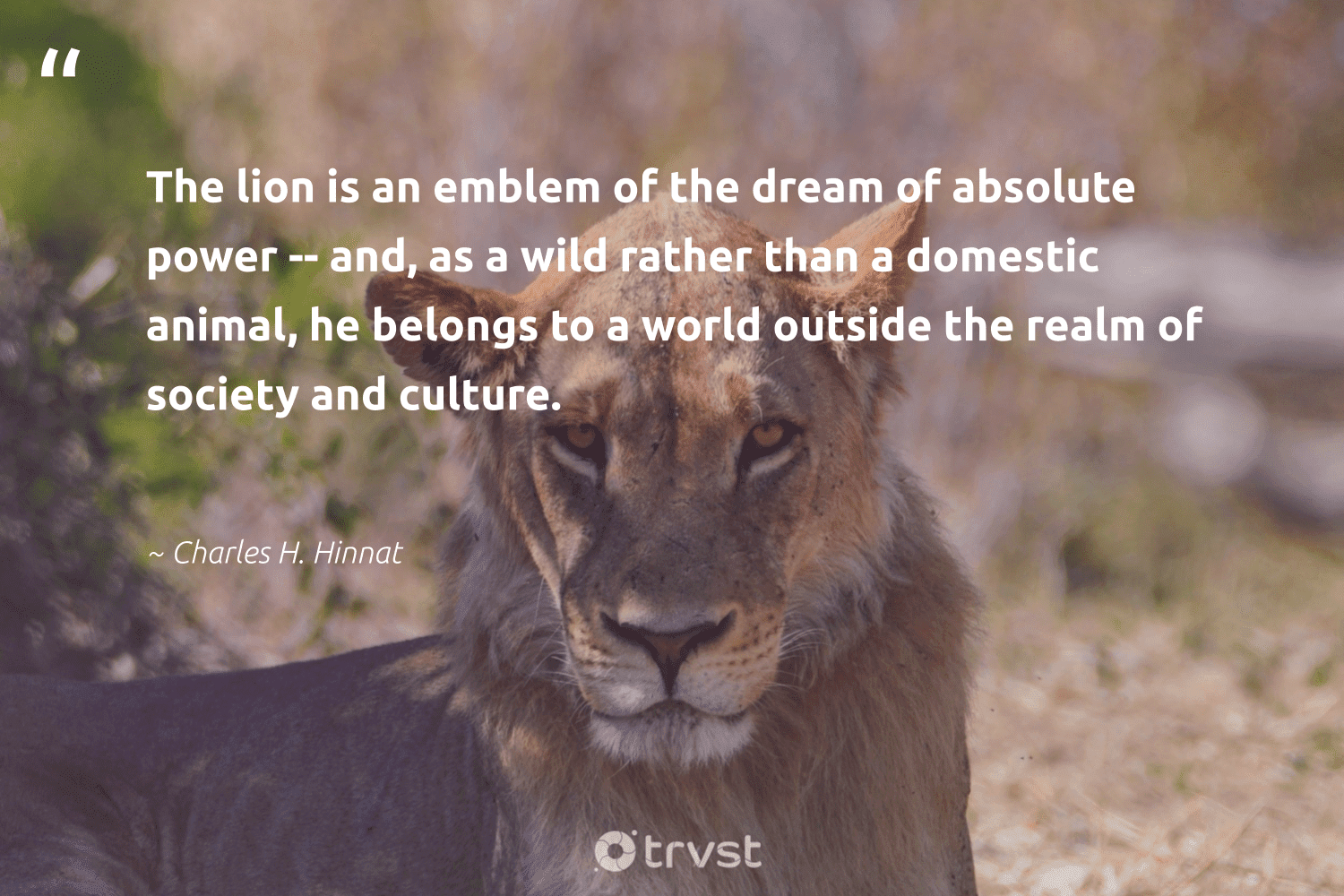 Hinnant is a prolific author and editor with 15 works in 74 publications.

As Hinnant's lion quote reflects, the lion represents power. Many organizations worldwide have taken the lion as a symbol of identity, exuding absolute power, and the lion’s roar is a significant symbol in many cultures. In many folk stories told worldwide, we use the lion to depict courage, strength, fairness, justice, and leadership. 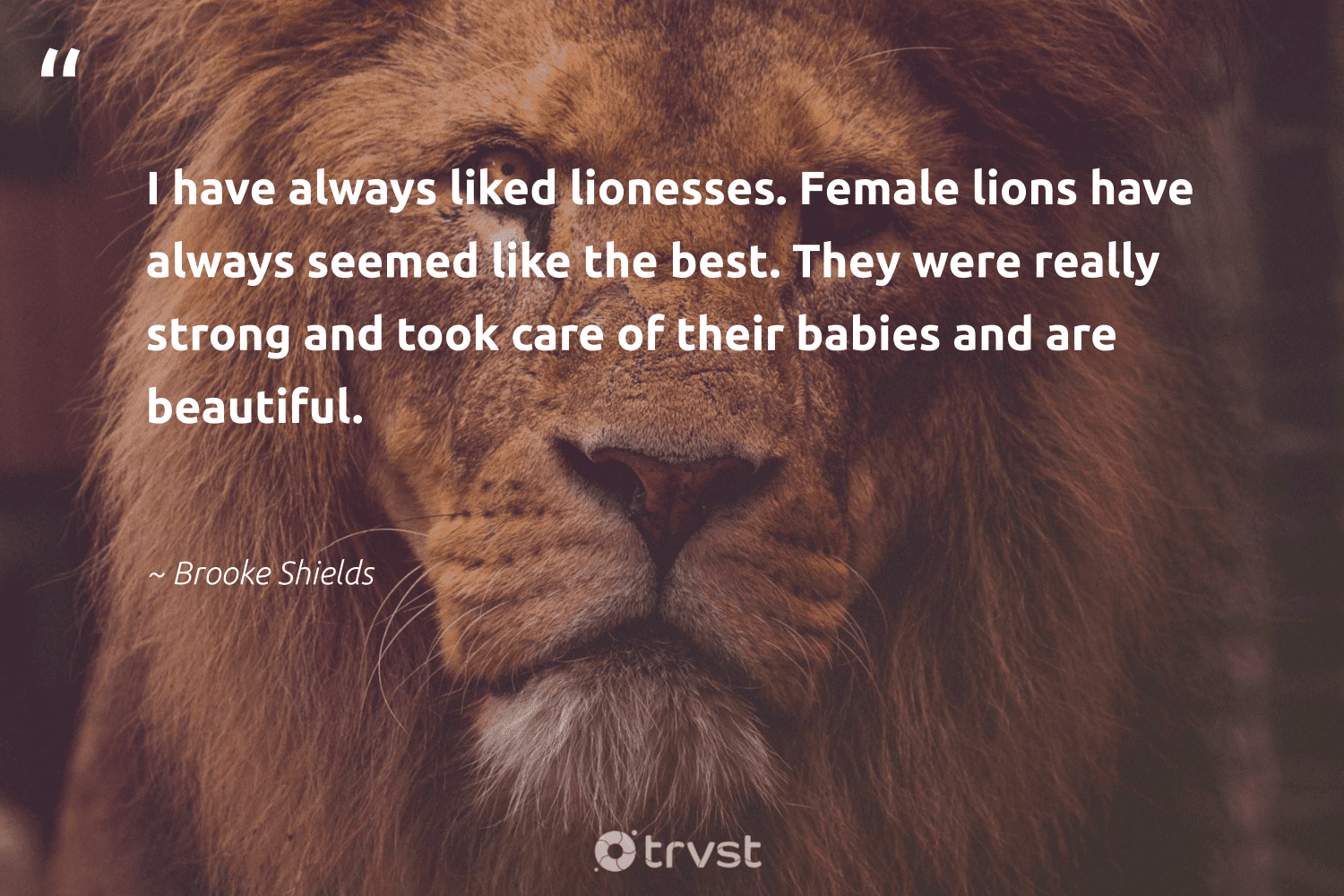 Initially a child model and actor, Shields attained critical acclaim at age 12 for her controversial, leading role in Louis Malle's film Pretty Baby. In 1980, at age 14, Shields was the youngest fashion model ever to appear on the cover of Vogue.

Next in our list of best lion quotes, Shields talks about the mothering instincts of the lioness. A Lioness hides her cubs from other animals, including her Pride, until they're about eight weeks. Lionesses work together to care for their young with concern to fight off infanticidal lions, sometimes to the death.

Our fear of lions, bravery, and fearless motivation. 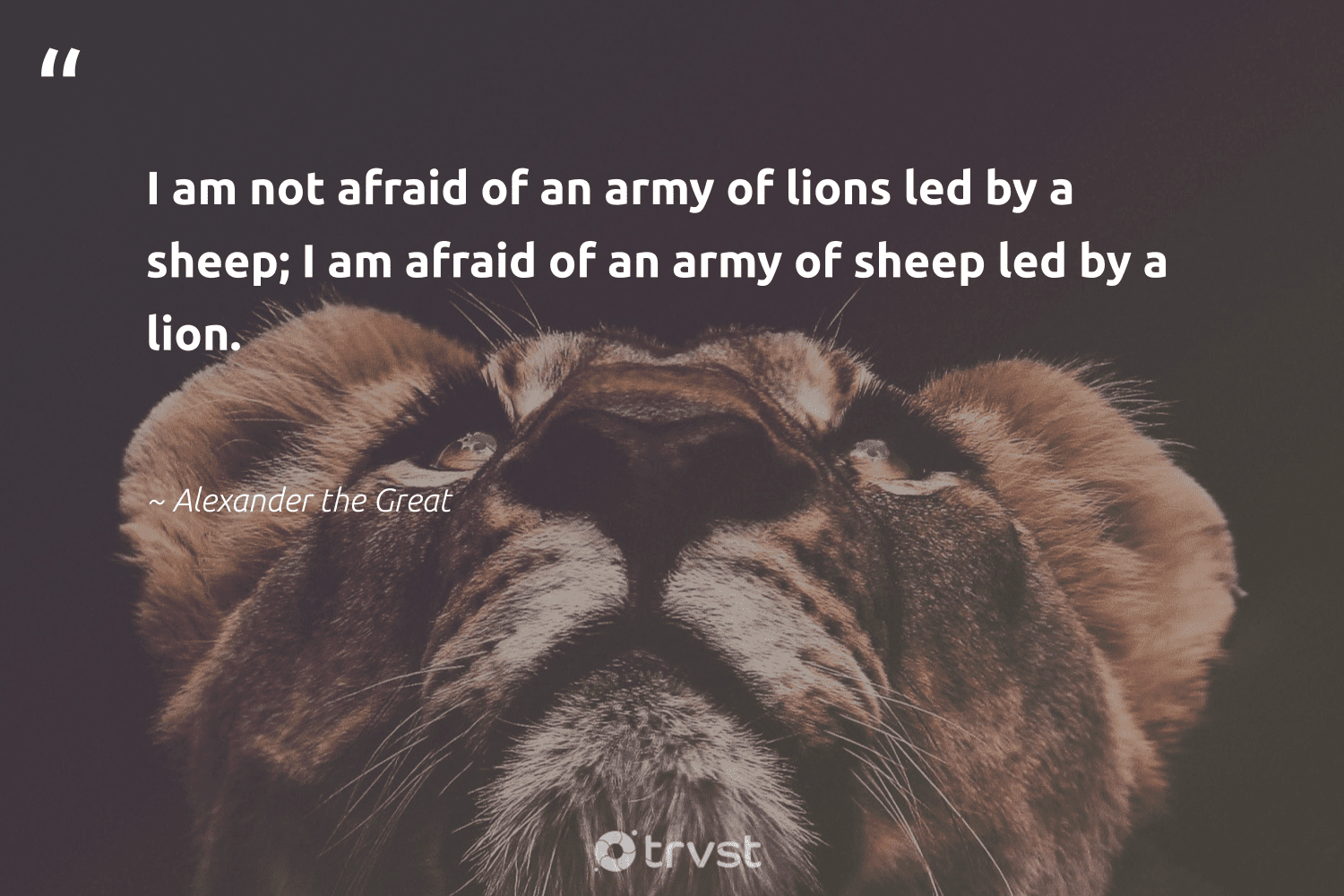 Considered as one of the most influential persons in history, Alexander the Great became king at 20. He ruled over the ancient Greek kingdom of Macedon, conquered Persia, and invaded India. He was a great tactician who had a record of being undefeated in battle. Military academies throughout the world measure military prowess using Alexander's standard and still teach his tactics.

His lion quote gives credit to their extraordinary bravery. Every Pride has a leader who can only be replaced by another lion who proves to be stronger in battle. When a coalition of ousted males takes control of a Pride, they kill the cubs of the defeated lions. They do this to get the lionesses to mate with them and prolong their bloodline. 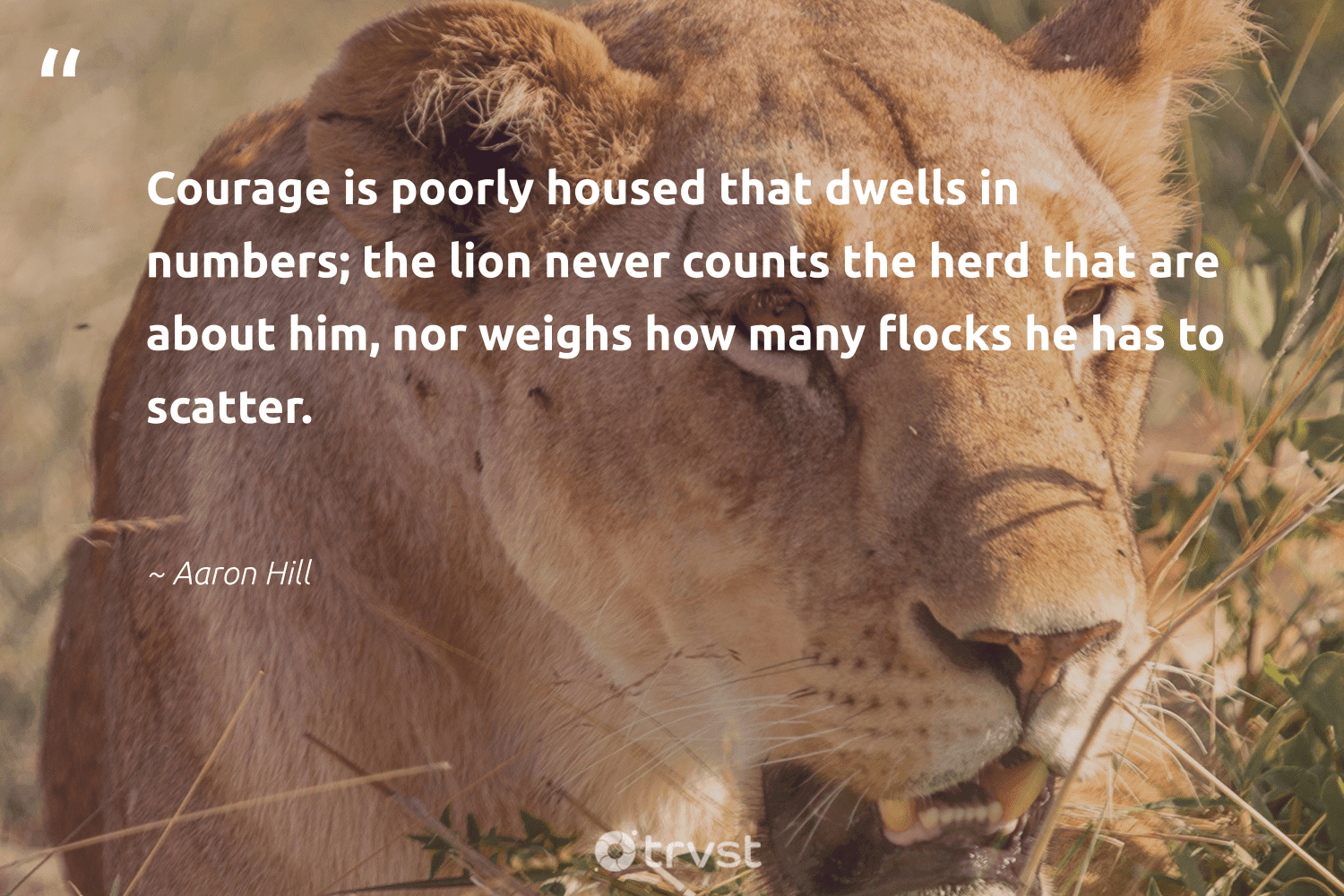 Aaron Hill was an English dramatist, poet, and essayist. Hill authored 17, some of which were adaptations. Hill died February 8, 1750, at 64. Publishers released posthumous collections of Hill's works in 1753 and 1760.

Lions prey on a large variety of animals ranging in size from rodents and baboons to buffalos and hippopotamuses. They usually hunt in groups, strategically causing chaos among herds of animals. The animals run off to safety, allowing the lions to catch the weakest and slowest of the herd. Lions help to remove old, sick, and weak herbivores from the population. 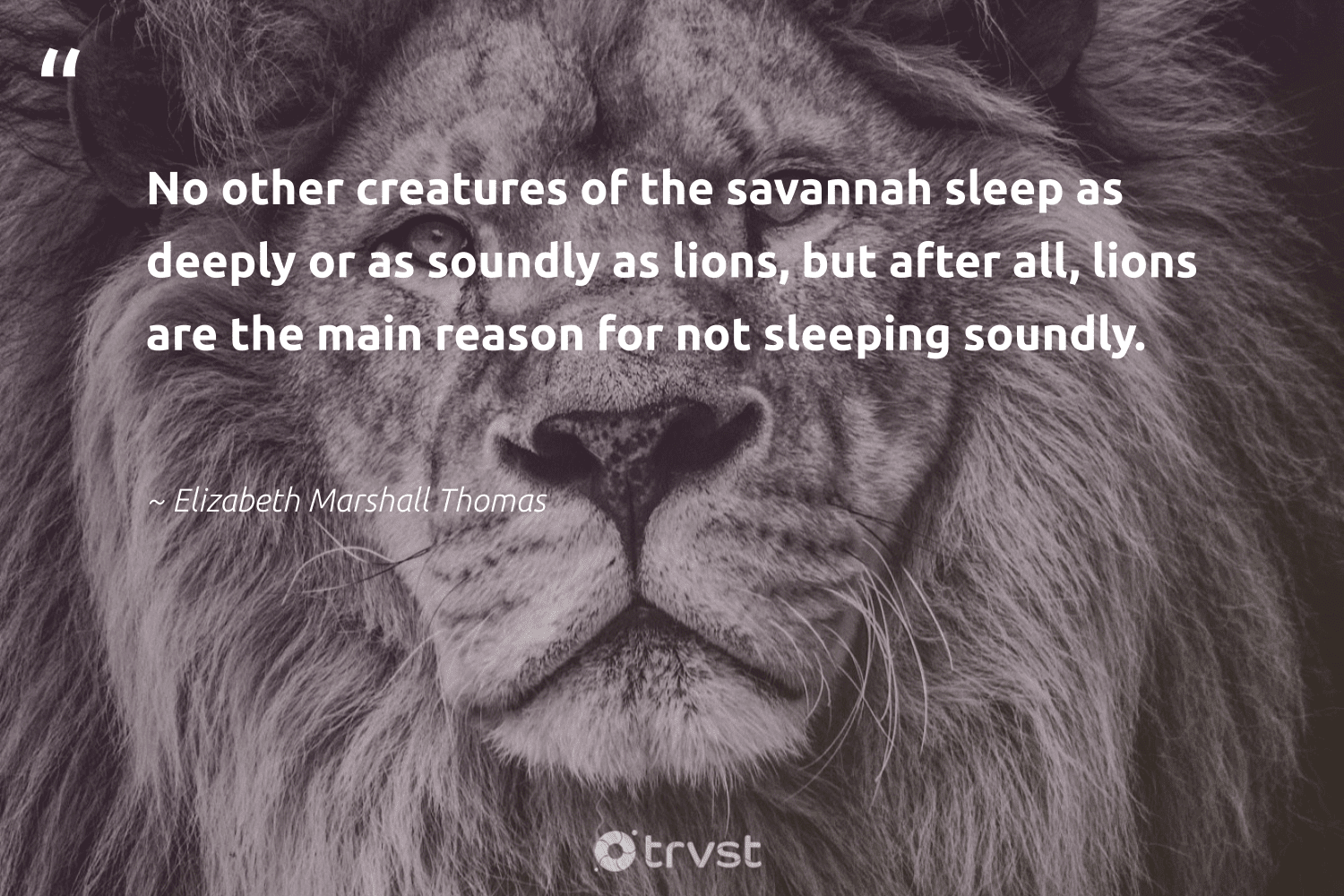 American author, Elizabeth Marshall Thomas, has published fiction, non-fiction books, and articles on animal behavior, Paleolithic life, and the Kung Bushmen of the Kalahari Desert. Thomas, in her publications, gives insight into the relationship between animals and humans. Her book The Hidden Life of Dogs (Amazon) became a New York Times bestseller.

The lion sleeps for an astonishing 20 hours a day, which leaves 4 hours to hunt and eat. Her lion quote reflects that while a sleeping animal may seem to be prime prey, very few animals dare to approach a sleeping lion. They deliver their distinctive roar in the evening before a night’s hunting and again before getting up at dawn.

"A Lion does not lose sleep over the opinions of sheep."

Taming lions and keeping them as a domestic animal 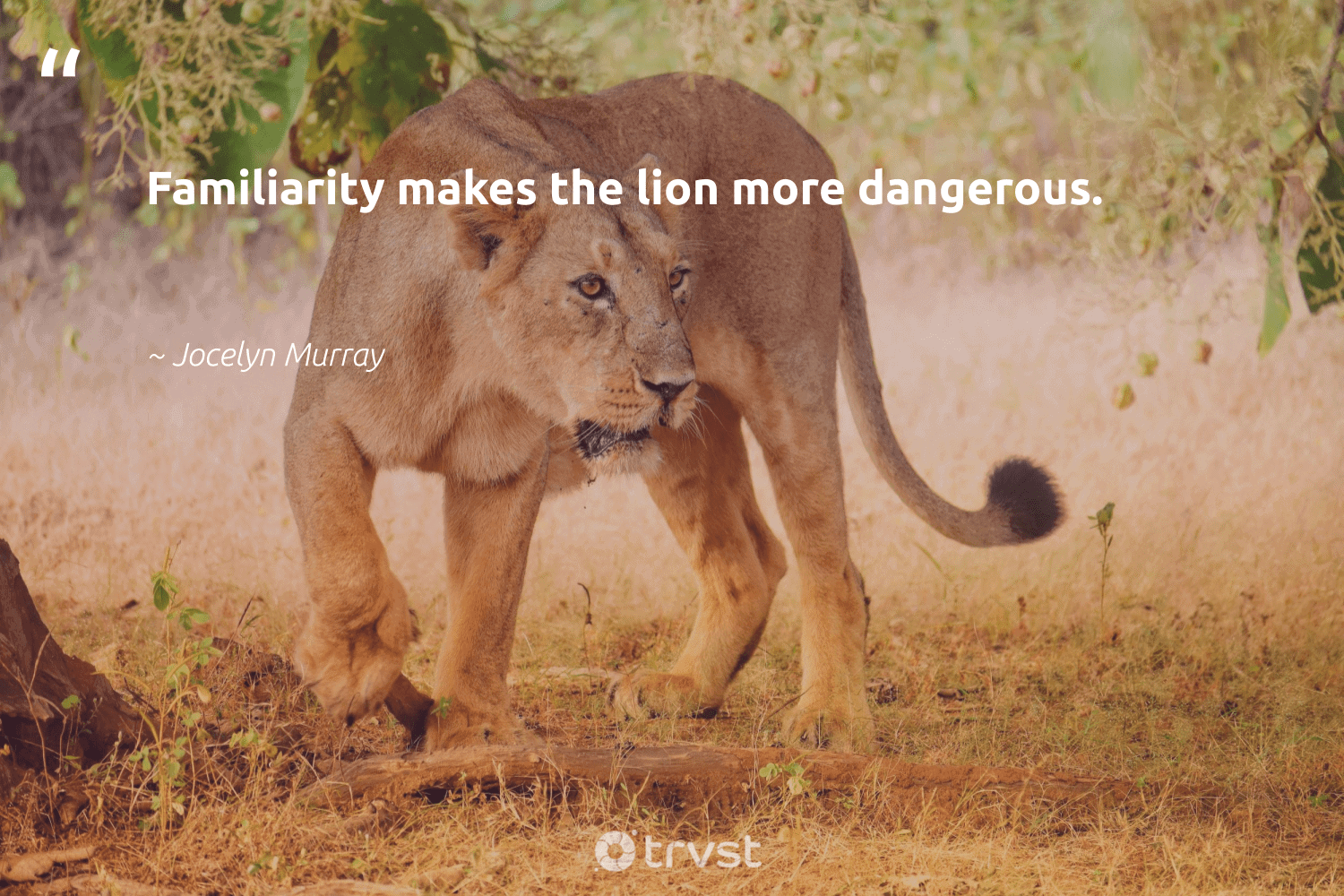 This lion quote captures the true nature of the lion. Lion tamers exist to domesticate lions or at least try to. However, a circus or animal act isn't natural for a lion. All the training in the world cannot change a lion from a wild animal. There have been cases where a seemingly tamed lion attacked humans.

Most animal advocacy groups state that animal attacks occur because of animal rage or frustration that arises due to unnatural living conditions. In 1966, the United States Department of Agriculture (USDA) signed the Animal Welfare Act into law and routinely inspects circuses, zoos, and other animal handling organizations for violations.

The injured lion and its roar 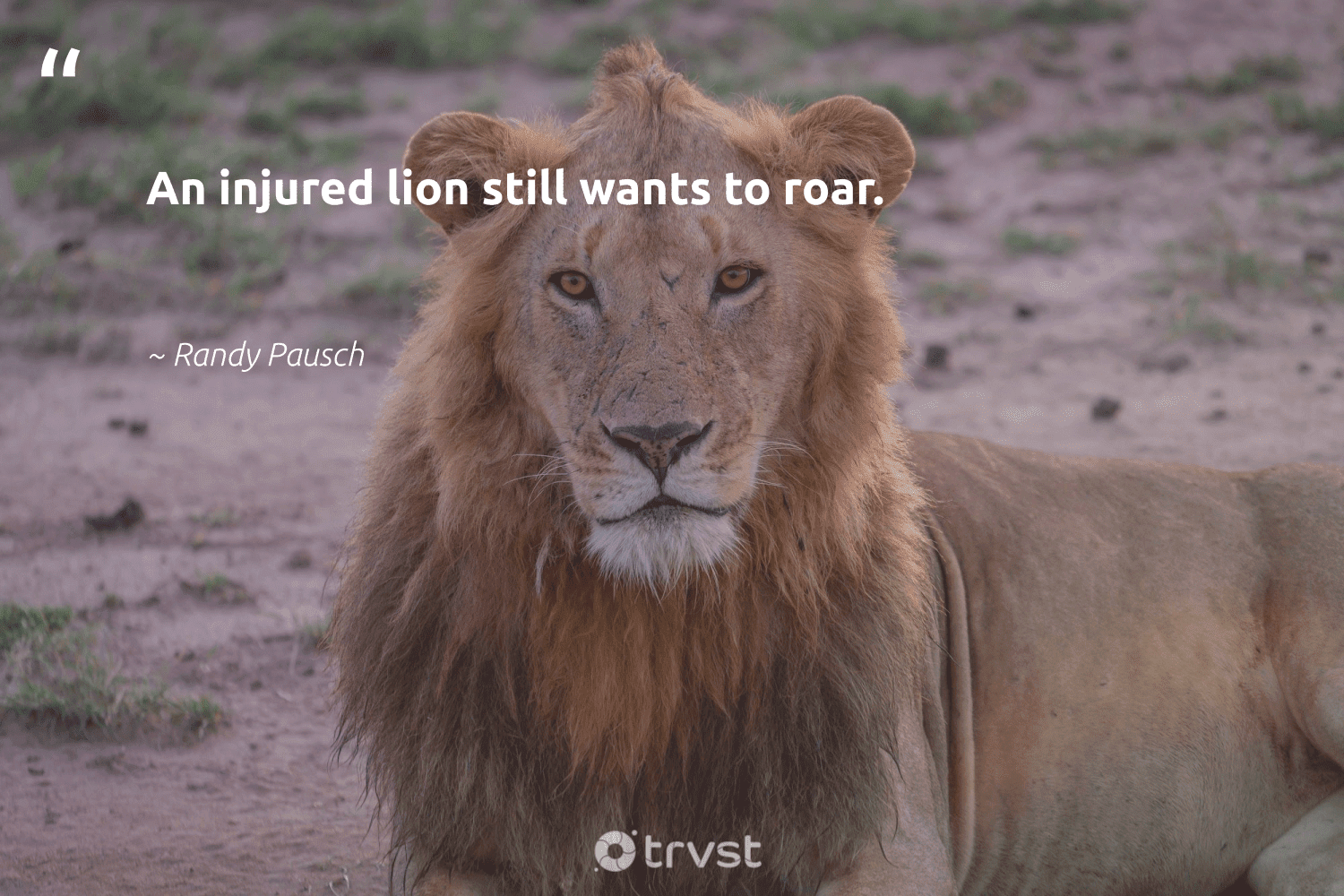 The lions’ roar is the loudest of all the big cats on earth. It can reach up to 114 decibels. That's 25 times louder than a gas-powered lawnmower. The sound can travel a distance of 8 kilometers. These incredible beasts roar to advertise their presence, scare off Intruders, warn the pride of impending danger, and as a show of power among other males during the hunt. It’d take a brave man to approach a lion in full roar. 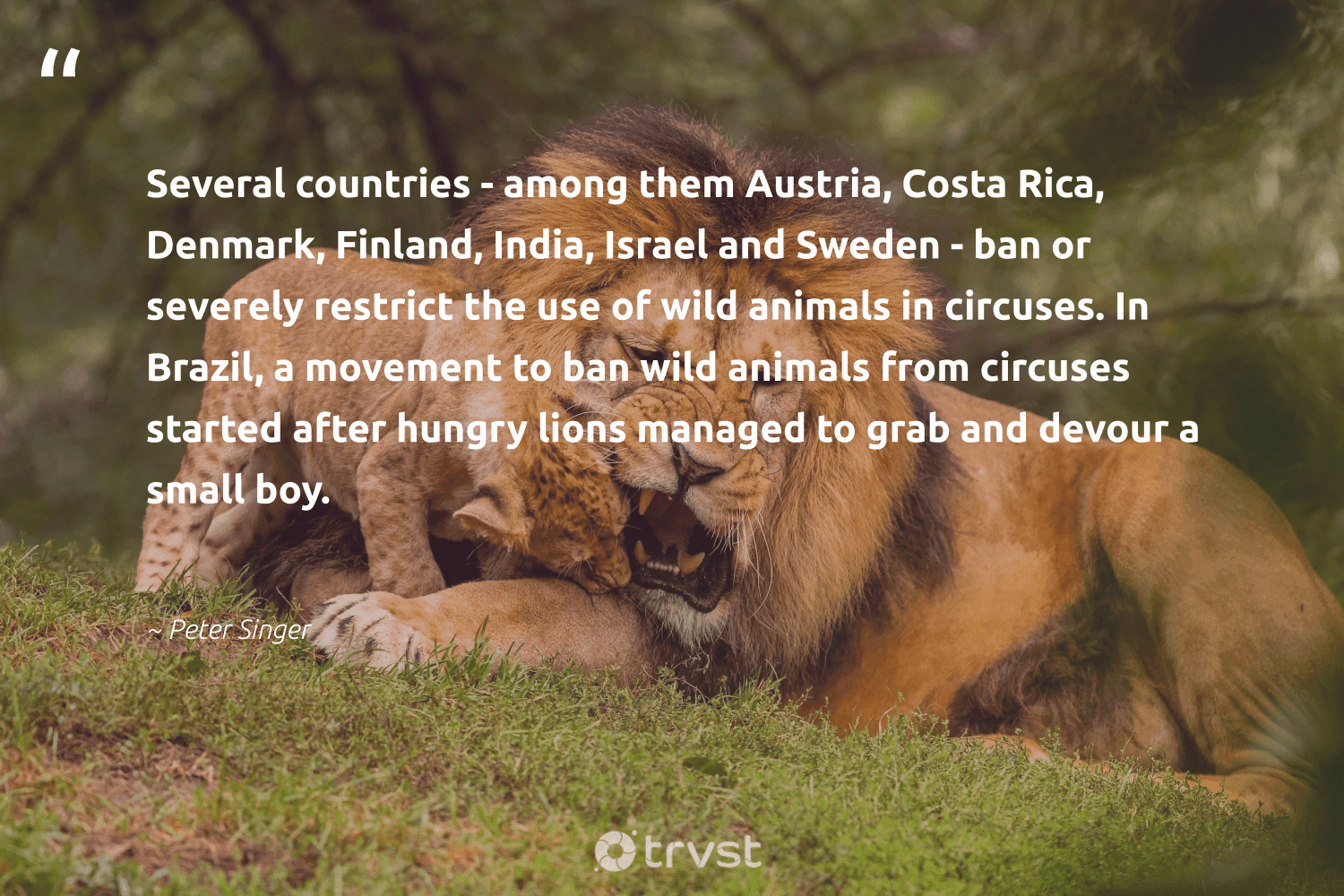 Singer is an Australian moral philosopher. He is the Ira W. DeCamp Professor of Bioethics at Princeton. He is also a Laureate Professor at the Centre for Applied Philosophy and Public Ethics at the University of Melbourne. He published the book Animal Liberation: A New Ethics for Our Treatment of Animals (amazon) in 1975. Singer devotes much of his resources to social and political causes.

Lions, for all their power, are not immune to animal cruelty at the hands of humans. According to PETA, although organizations who keep exotic animals claim to use humane training methods, there's no way to verify what happens behind closed doors. The population trend for lions is currently stable, but the IUCN Red List Status of the Lions says they are endangered. Lions are a major attraction at zoos, circuses, and homes of certain influential people. Poaching lions to supply illegal animal markets puts lions in danger of extinction. Lion life depends on the protection we can provide in the wild to protect them from poaching and habitat loss. 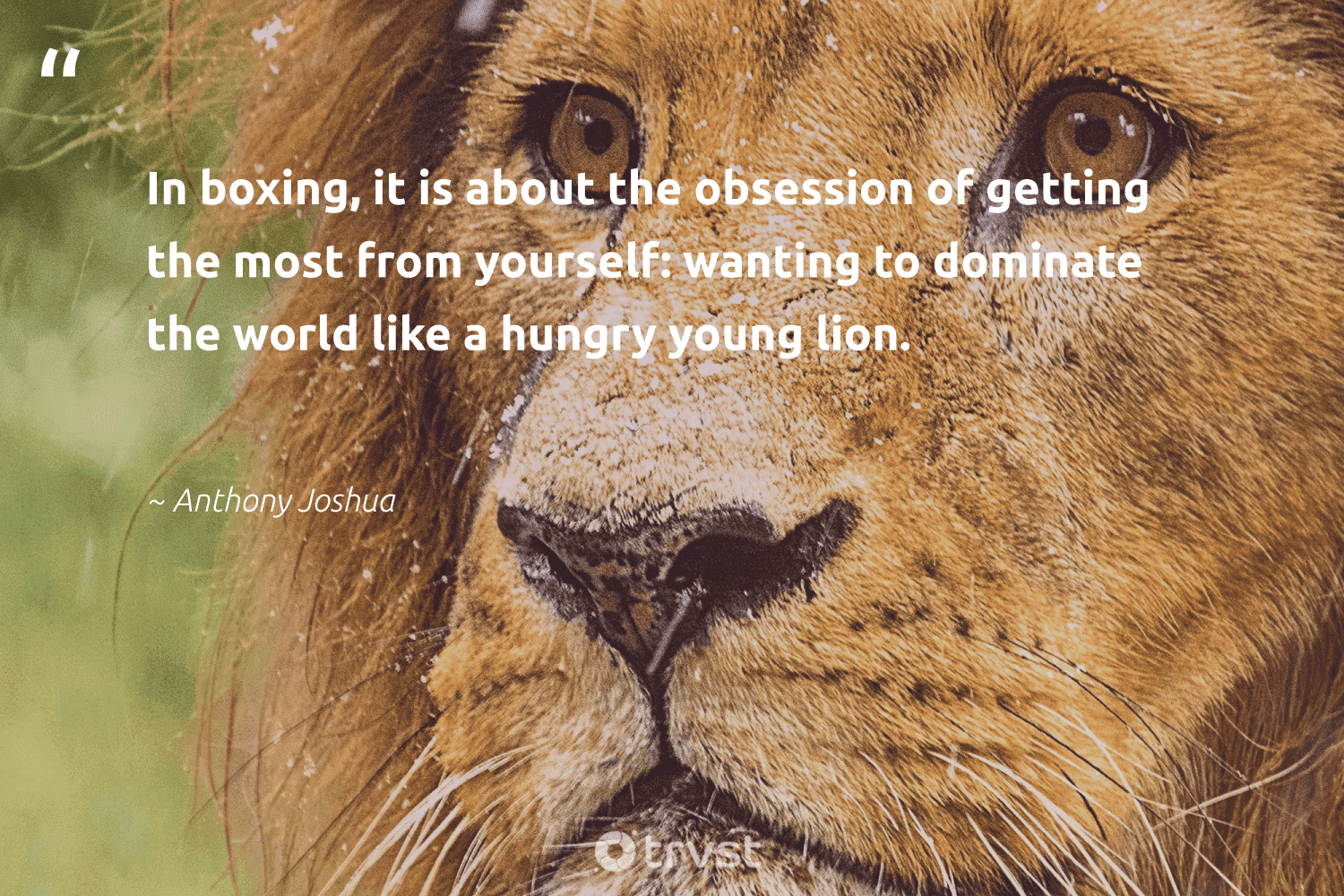 Also known as AJ, Anthony Oluwafemi Olaseni Joshua is a British professional boxer. He is a two-time unified heavyweight champion. In April of 2020, Joshua ranked as the world's second-best active heavyweight by The Ring magazine.

Lions are naturally dominant and stubbornly consistent in pursuing their intentions. They guard their territory and interests. An ousted lion will try to fight his way back into Pride.

Chanakya was an ancient Indian teacher, philosopher, economist, jurist, and royal advisor. He authored the Arthashastra, “The Science of Material Gain.” The book is a political treatise that guides the philosopher in running an empire.

Chanakya's lion quotes tells us that we can learn a lot from the lion. One lesson is how a lion approaches risky situations with confidence and intensity. Whether hunting, roaring or eating, lions put their energy into whatever they are doing.

In 2014, Fish and Wildlife Service director Dan Ashe warned that the African lion might be extinct by 2050. Many don’t realize that human-lion conflict is an ongoing threat to these animals. According to National Geographic, retaliatory lion killing through carcass poisoning, poaching, and habitat encroachment are dangers lions face from humans. We need concerted effort to protect lions from human activities that endanger their lives every day.

Here are three of the best lion king quotes for good measure.

"Oh yes, the past can hurt. But from the way I see it, you can either run from it, or learn from it."

"Everything you see exists together in a delicate balance. As king, you need to understand that balance and respect all the creatures, from the crawling ant to the leaping antelope."

"Everything you see exists together in a delicate balance. As king, you need to understand that balance and respect all the creatures, from the crawling ant to the leaping antelope." 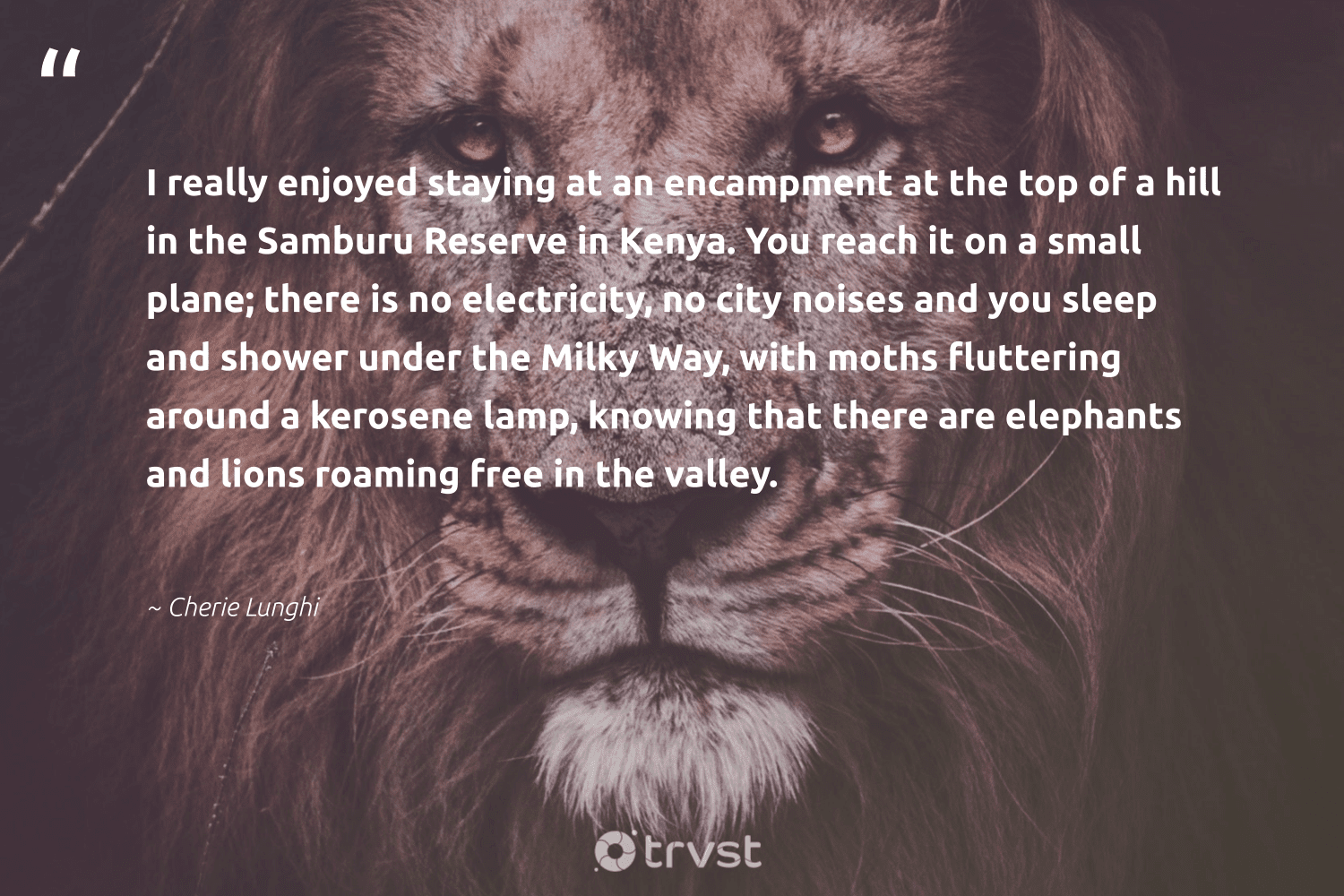 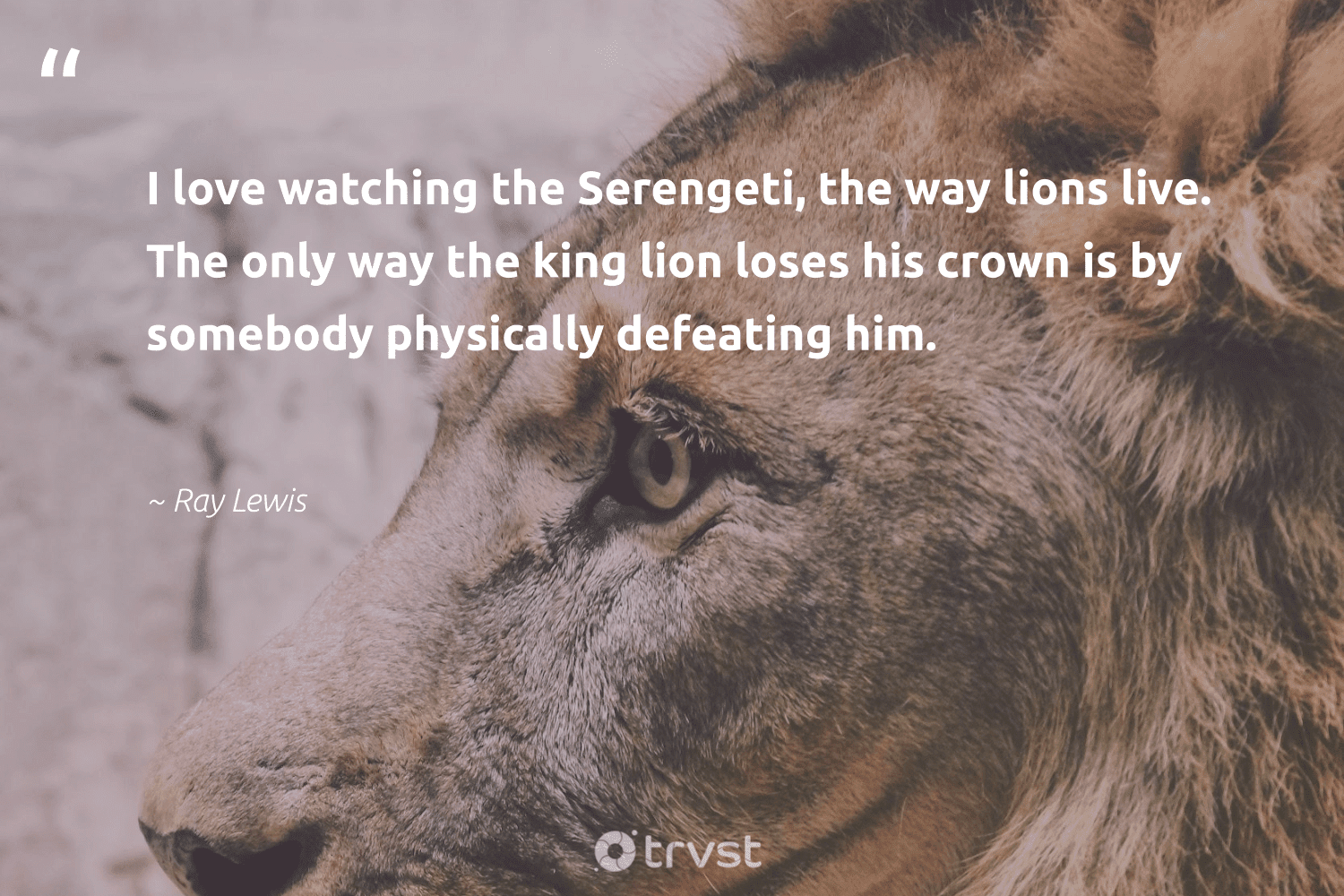 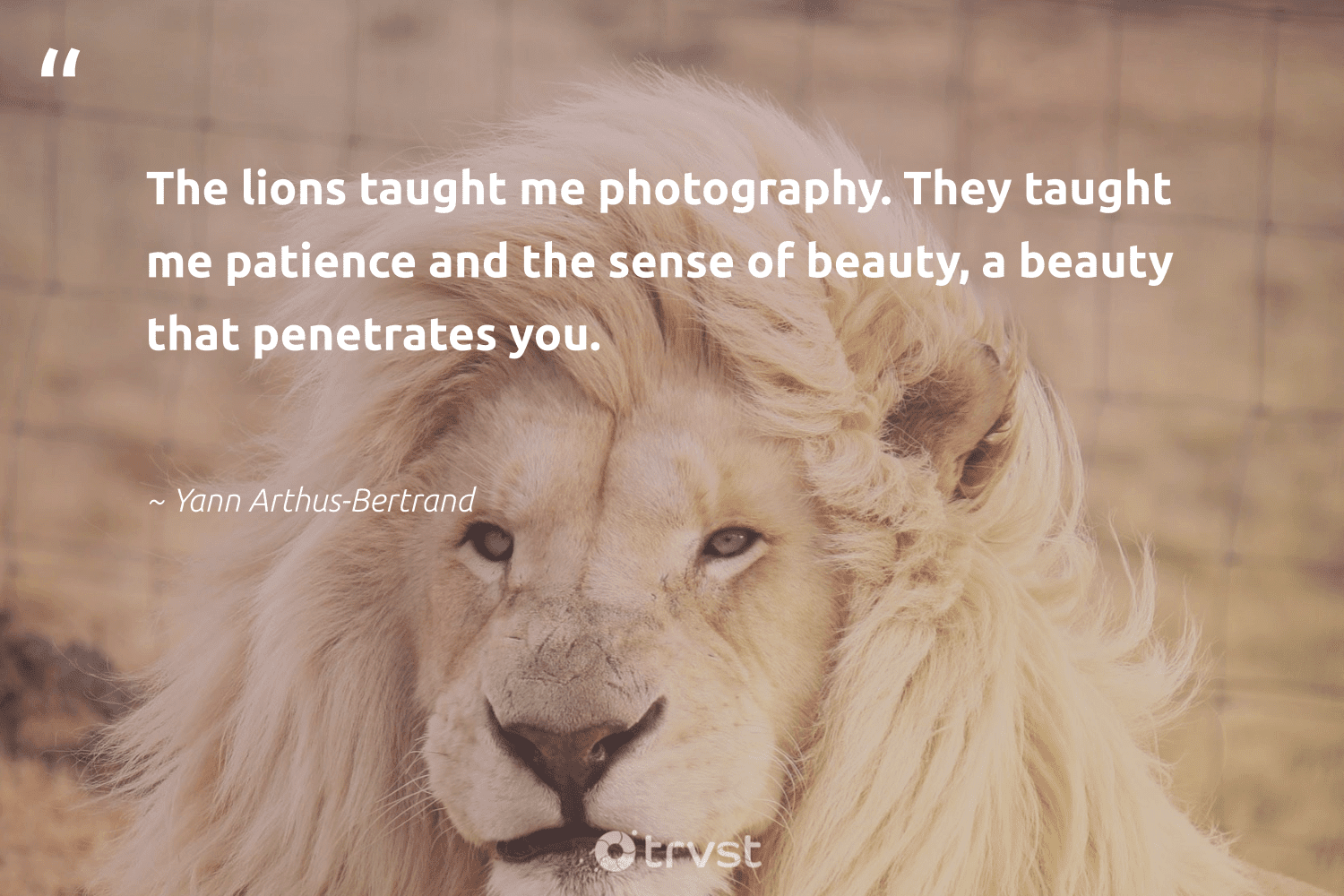 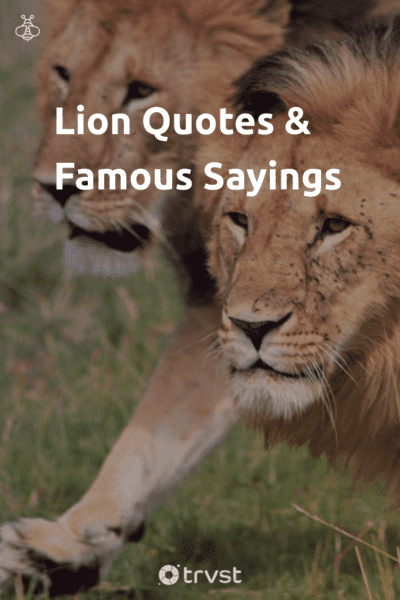 Photo by Sarah Kilian on Unsplash 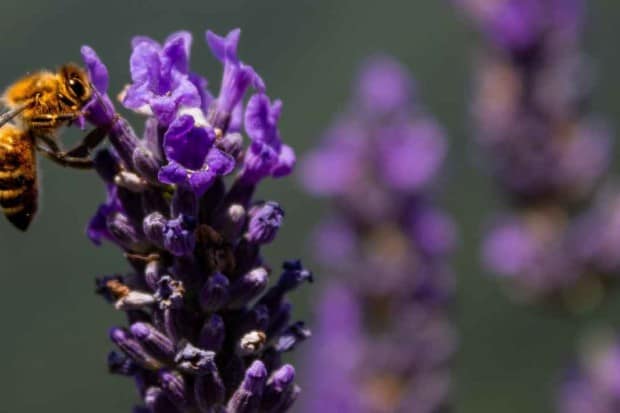 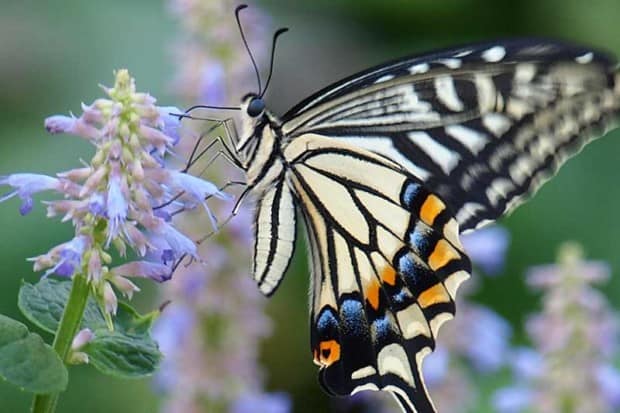 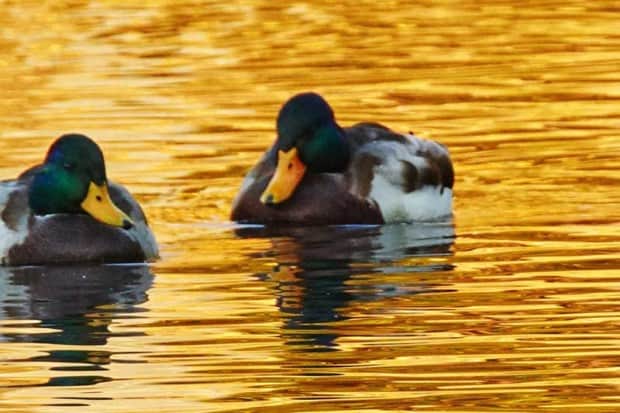 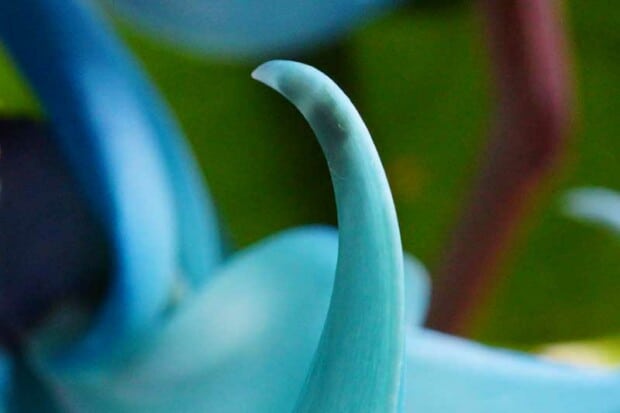 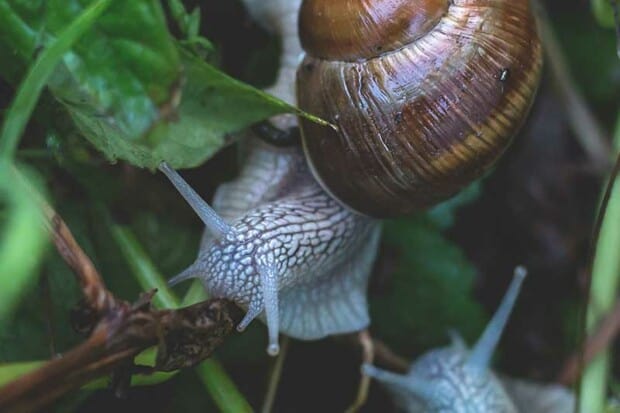